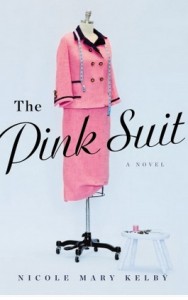 The pink Chanel suit worn by First Lady Jacqueline Kennedy on the day her husband was killed is a Shakespearan icon of the tragedy of November 22: a woman’s beautiful garment soaked in her husband’s blood.

“I didn’t want to pander, to become part of the cottage industry of Kennedy books,” says novelist Nicole Mary  Kelby about her new book, The Pink Suit. .”This book is not about cute clothes. It’s about how Jackie Kennedy set out to redefine how Americans defined themselves. Mamie and Ike Eisenhower (the Kennedys’ predecessors in the White House) were Grandma and Grandpa.”

This book isn’t even a book about Jackie Kennedy (she only appears once and is referred to throughout only as “the Wife”). Rather, it is a book about something that is now almost equally important: How November 22 shaped  the way Americans understand themselves.

As Carol Memmot wrote in her review for the Washington Post.

“Few items of clothing provoke as much emotion as the outfit Jackie was wearing on that fall afternoon. The confection of pink bouclé wool is tucked away in a National Archives storage facility, the blood stains never removed. The mystique surrounding it is locked in our memory.”

The first Lady loved the pink suit and so did her husband, who said she looked “ravishing” in it, although Mary Ann Grossman of the St. Paul Pioneer Press notes, “It wasn’t, in fact, pink. Coco Chanel called it raspberry, but it was various subtle shades. The handmade boucle tweed fabric from the famous Linton Tweeds in England was so soft it wasn’t practical, and the silk lining was fragile. But Jackie wore it often.”

The book tells the story of pretty Irish immigrant Kate, who sews the pink suit with near-reverence from patterns sent by Chanel. She works for Nona Park and Sophie Shonnard, real-life owners of Chez Ninon, a small couture house on New York’s Park Avenue that catered to society women such as Jackie Kennedy and her  mother, Janet Auchincloss.

“Kate loves working on beautiful fabrics that will be worn by glamorous women,” writes Grossman. ” She also loves a poetry-reciting butcher but isn’t sure she wants to marry and give up her job. Her hours at Chez Ninon, surrounded by beauty, are a stark contrast to her home life in Inwood, the northernmost neighborhood on Manhattan Island that was a Catholic Irish-American community in the 1960s:Kate’s world was that of the hot dog vendors, with their torn peacoats, the carriage drivers, in their fraying top hats, and the police, in their rough wool and scuffed shoes.”

When the suit becomes famous for the wrong reasons, Kate realizes she has to make changes in her life.

The Pink Suit, in short, is about a turning point.