Larry Sabato says no, and will make his case at the Newseum later today.

Welcome to the “acoustics evidence,” the epicenter of one of those fierce polemical storms that plague discussions of JFK’s assassination. Sorting out who to believe is not easy.

Dr. Robertson (with whom I have a passing acquaintance) deserves a hearing. He isn’t a “conspiracy theorist.” He is a semir-retired radiologist who has devoted years to studying the JFK story He is the only diagnostic radiologist outside governmental review panels to have examined the original autopsy materials held at the National Archives. He is conversant with the complex array of crime scene evidence from the president’s murder. His methods are empirical. Whether you agree with is findings, his outlook is scientific and his purpose is civic-minded. 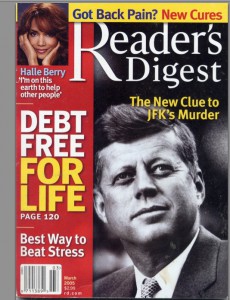 If you don’t want to dig that deep, you can read my summary of the acoustics evidence for Readers Digest in 2005. My view, after talking with the most knowledgeable experts, is that Robertson’s answer is not implausible. While not indisputable as his writing sometimes suggests, Robertson’s case has several strengths that his critics have not refuted.

Scholars of JFK’s assassination have argued about whether the sound of the gunshots that killed President Kennedy were recorded since 1977. That’s when JFK researchers in Dallas gave long-neglected recordings of the Dallas Police Department to congressional investigators. The recordings captured the conversations among police officers at the time of JFK’s assassination.

In 1978, the House Select Committee on Assassinations (HSCA) hired James Barger, one of the country’s leading acoustical engineers, to analyze the recording. Barger’s report concluded that the sound of the gunshots killed Kennedy had been captured by a open microphone of a nearby police motorcycle, and that the acoustic properties of the gunshots indicated Kennedy had been hit by gunfire from two directions. In June 1979, twenty-three members of Congress endorsed that finding, which was central to the HSCA’s conclusion that JFK was the victim of conspirators who could not be identified.

Plot twist #1: Two years later, a scientific panel led by Harvard physics professor Norman Ramsey reviewed the Dallas Police Department recording and concluded that the fatal gunfire had not been recorded, that the sound impulses that Barger identified as gunfire were, in fact, random noise.

Plot twist #2: In March 2001, Don Thomas, a U.S. government scientist, reviewed the findings of Barger and Garwin and concluded that Barger was correct. His findings were published in Science, a peer-reviewed British journal and reported in the Washington Post by George Lardner, perhaps the  most knowledgeable reporter in Washington press corps on JFK’s assassination.

Robertson’s findings match Thomas’s in some respects but differ on the sequence and time of the shots.

Thomas’s critics say he is mistaken. Dale Myers, a computer animation specialist who has compiled a photographic timeline of November 22, argues that the sound impulses were not created by gunshots and the “acoustic evidence” is not evidence of anything. You can read Myers study here.

Michael O’Dell, who has studied the Dallas Police Department recording equipment, says the sound impulses were created a minute after the assassination. Dell makes his case here.

Sabato says the new findings of

In this video Josiah (“Tink”) Thompson, author of “Six Seconds in Dallas” and veteran insurance investigator, explains why he thinks the sound recording from Dealey Plaza matches up with the Zapruder film.

17 thoughts on “Is there an audio recording of the JFK assassination?”