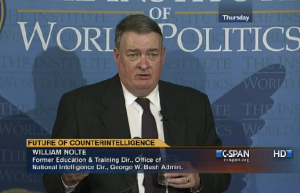 After a speech on CSPAN about the impact of Edward Snowden’s revelations by William Nolte, a former CIA counterintelligence official, Karl Golovian asked him about the 1,100 JFK records that the CIA is still keeping secret until October 2017.

Nolte, a critic of Oliver Stone, responded that it sounded like a classic case of over-classification and a disservice to the public, but….

“I do think that there are 1,100 files from that period there still sitting classified … and we all know we classify too much and keep it too long….This goes back to my concern about Venona [a U.S. counterilligence operation in the late 1940). When you have a public dispute of this sort and you’re sitting on records that can help resolve that dispute, you do great harm to the public record.”

The Venona files, kept secret for decades, clarified the long-standing controversy over Alger Hiss, the former State Department official accused of being a communist. The Venona files indicated that Hiss had been a source for Soviet intelligence.

Nolte’s comment is obviously true and welcome. But when asked if he would support the release of the JFK records, Nolte stammered and said “No.”

That was telling too. Post-Snowden, the secrecy system can be challenged in principal but challenging on the specific issue of JFK records is still a bridge too far for this CIA man

You can watch Nolte’s entire comments here. He comments on Stone’s “JFK” around the 7:25 mark.

6 thoughts on “Former CIA official on JFK secrecy: ‘You do great harm to the public record’”