Paul Hoch begs to differ with me on Roger Stone. I think Stone’s upcoming book on LBJ and JFK’s assassination should be taken seriously because of Stone’s contacts and experience. Hoch finds Stone to be an unreliable analyst who is prone to exaggeration.

Hoch cites one point of fact — about Richard Nixon and Jack Ruby — where he thinks Stone is misinformed. His argument, endorsed by Gary Mack of the Sixth Floor Museum, provides a useful test of Stone’s credibility.

I have tremendous respect for Paul Hoch, who knows the JFK case better than almost anyone and has taught me a great deal about bad evidence. But in this case, I think he his mistaken, and Stone is probably right.

Hoch picked up on a comment Stone made to me in his interview with JFK Facts: “Nixon recognized Jack Ruby and knew him since 1947 as a ‘Johnson Man.’ Upon seeing Ruby kill Oswald on national TV Nixon recognized him — and understood what had really happened in Dallas.”

Hoch noted that this echoed something Stone had written on his Facebook page: “Nixon knew Jack Ruby, hired him on House payroll in 1947 at request of … Lyndon Johnson. Newly released documents prove it. In my upcoming book ‘The Man Who killed Kennedy: The Case against LBJ.'”

In a comment on Stone’s article, author Jean Davison noted that a “letter from Nixon mentioning a ‘Jack Rubenstein’” has been around for a long time. The document in question is not exactly a letter, nor is it “from Nixon.” Rather, it is sworn statement, dated Nov. 24, 1947, from a staffer (identified only as ‘LS”) who asserts that “Jack Rubenstein of Chicago” was “performing information functions” for Nixon’s staff and should not be called to testify in open hearings by the House Un-American Activities Committee.

Long ago, when Hoch was more conspiratorially minded than he is now, he wrote that he thought the letter was a forgery.

In 2006 Gary Buell posted a detailed commentary on questions about the document’s authenticity. One key point of dispute is the letterhead on the document that includes a five-digit Zip Code — a system not adopted until 1963.

“Even if it’s real,” Davison says, “the Jack Rubenstein mentioned is almost certainly a different person, a prominent member of the Young Communist League in the 1920s whose death was reported in the New York Times, July 8, 1989, p. 29. (“Jack Rubenstein, 81, Labor-union Official.”) This Jack Rubenstein helped organize a textile workers’ strike in New Jersey in 1926, when “our” Jack Ruby would’ve been 15. He later broke with the CP — which would explain why the Nixon letter says he was “a potential witness” for the HUAC.” 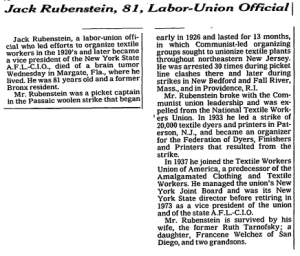 Gary Mack of the Sixth Floor museum endorses Davison’s view — that the document refers to the communist Jack Rubenstein, not the Jack Rubenstein changed his name to Jack Ruby. Mack says a Chicago newspaper reporter debunked the story that Nixon knew Ruby a long time ago. I’ve asked him to provide a copy of the debunking, and he says he will try to track it down.

:The document is not forged,” he said by email. “The zip code is on a cover-sheet that was attached in 1978 and copied atop the original document. I reviewed records from the Clerk of the House to determine this.”

Stone also said he has “a direct quote from Nixon who acknowledged in 1989 that his aide Murray Chotiner brought Ruby to him in 1947 and told him LBJ wanted Ruby hired as an informant for the House UnAmerican Activities Committee,” otherwise known as HUAC. At this point I think the preponderance of evidence favors Stone. That is to say, I think the document is a genuine HUAC record from 1947. Per Occam’s Razor, I think that the explanation that the more modern letterhead with the zip code was copied along atop the original document is a simpler, less conspiratorial explanation than forgery.

A more definitive pronouncement would be premature. The possibility of forgery cannot be ruled out until the original document can be located and examined. The newspaper article cited by Mack may also have important information.

The significance of the record is yet another issue. After all, so what if Congressman Richard Nixon had a passing acquaintance with Jack Ruby 16 years before the events of November 1963? Even if authentic, the document sheds no light on Stone’s more consequential allegation: that it was Congressman Lyndon Johnson who recommended Ruby to Nixon in 1947. To assess that claim we need to know more about what Murray Chotiner, a close aide to Nixon, said and when he said it.