Deprecated: Function Elementor\DB::is_built_with_elementor is deprecated since version 3.2.0! Use Plugin::$instance->documents->get( $post_id )->is_built_with_elementor() instead. in /home/cnw9flf6e/public_html/wp-includes/functions.php on line 5379
 Did Mafia bosses admit involvement in JFK's assassination? > JFK Facts Skip to content

While the claim appears in several books, the supporting evidence is weak. 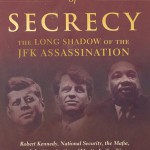 Lamar Waldron and Thom Hartman’s book “Legacy of Secrecy” claims that Carlos Marcello, the crime boss in New Orleans in the 1960s, took credit for the killing of President Kennedy in a jailhouse conversation overheard by the FBI in the 1980s.

Frank Ragano, an attorney for Marcello and Santos Trafficante, the crime boss of Tampa, wrote a book saying Trafficante had told him a few days before he died in 1987 that the Mafia had killed Kennedy.

But those claims are impossible to corroborate, according to Anthony Summers & Robbyn Swan. (Summers is author of “Not In Your Lifetime,” one of the best books about JFK’s assassination. Swan is co-author of their book on the Sept. 11 attacks, “The Eleventh Day.”)

Two FBI agents who supervised the wiretapping of Marcello at a federal prison told Summers and Swan that Marcello never made the remarks attributed to him.

So the “Mafia done it” theory of JFK’s death lacks evidentiary support on a key point.

56 thoughts on “Did Mafia bosses admit involvement in JFK’s assassination?”