“By early 1961, at least three different CIA counterintelligence teams were watching an obscure young man named Lee Harvey Oswald,” writes Bill Simpich in Chapter 2 of his fascinating book,  “State Secret,” which is being serialized on MaryFerrell.org. 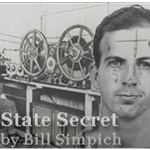 One team was the mole hunters from an office within the CIA’s Counterintelligence Staff known as the Special Investigations Group, or CI-SIG.

The second team came from the CIA’s Soviet Russia division, where an officer named Bill Bright was studying Oswald’s biography, which had taken him from an itinerant childhood in Texas and New York City to a stint in the U.S. Marines and then to defection to the Soviet Union.

The third team was a husband-and-wife team known as the Potockis. Anita and Will Potocki were CIA officers personally loyal to Bill Harvey, going back to their days together in Berlin.

“To understand the relationships among these three teams,” writes Simplich, “you have to know just who Bill Harvey was.”

34 thoughts on “CIA teams were watching Oswald in 1961, two years before JFK was killed”