Deprecated: Function Elementor\DB::is_built_with_elementor is deprecated since version 3.2.0! Use Plugin::$instance->documents->get( $post_id )->is_built_with_elementor() instead. in /home/cnw9flf6e/public_html/wp-includes/functions.php on line 5379
 CIA officer received a medal for his role in JFK cover-up > JFK Facts Skip to content

Last month, the CIA released a presidential daily briefing from November 25, 1963, which revealed senior agency officials hid the extent of their pre-assassination knowledge of suspect Lee Harvey Oswald from the White House. The briefing showed where the CIA’s JFK cover-up originated: in the Directorate of Operations and the Counterintelligence Staff.

The revelation is a kind of prequel to another recent disclosure:

In 1981, the CIA honored one of the undercover officers who helped perpetrate the JFK assassination cover-up that began on November 25, 1963. The agency’s lawyer now contend in federal court, a half century after the fact, disclosure about this officer have no “public benefit.”

Documents and photographs obtained in my lawsuit Morley v. CIA showed that the agency awarded a medal to undercover officer George Joannides, a career officer in the Directorate of Operations. after he concealed material facts from JFK investigators.

Joannides, who died in 1991, served the chief of CIA psychological warfare operations in Miami in 1963. In 1978 he acted as the agency’s liaison to the House Select Committee on Assassinations (HSCA).

In both assignments, Joannides failed to disclose to investigators what he knew about contacts between his agents in Miami-based anti-Castro group and accused assassin Lee Oswald.

G. Robert Blakey, former counsel to the HSCA, told PBS Frontline that the revelations about Joannides called into question everything CIA officials told him during his probe.

“That the Agency would put a “material witness” in as a “filter” between the committee and its quests for documents was a flat out breach of the understanding the committee had with the Agency that it would co-operate with the investigation,” he said.

Yet for his actions, Joannides received a medal.

Here’s the citation for the Career Intelligence Medal, which Joannides received on July 15, 1981. 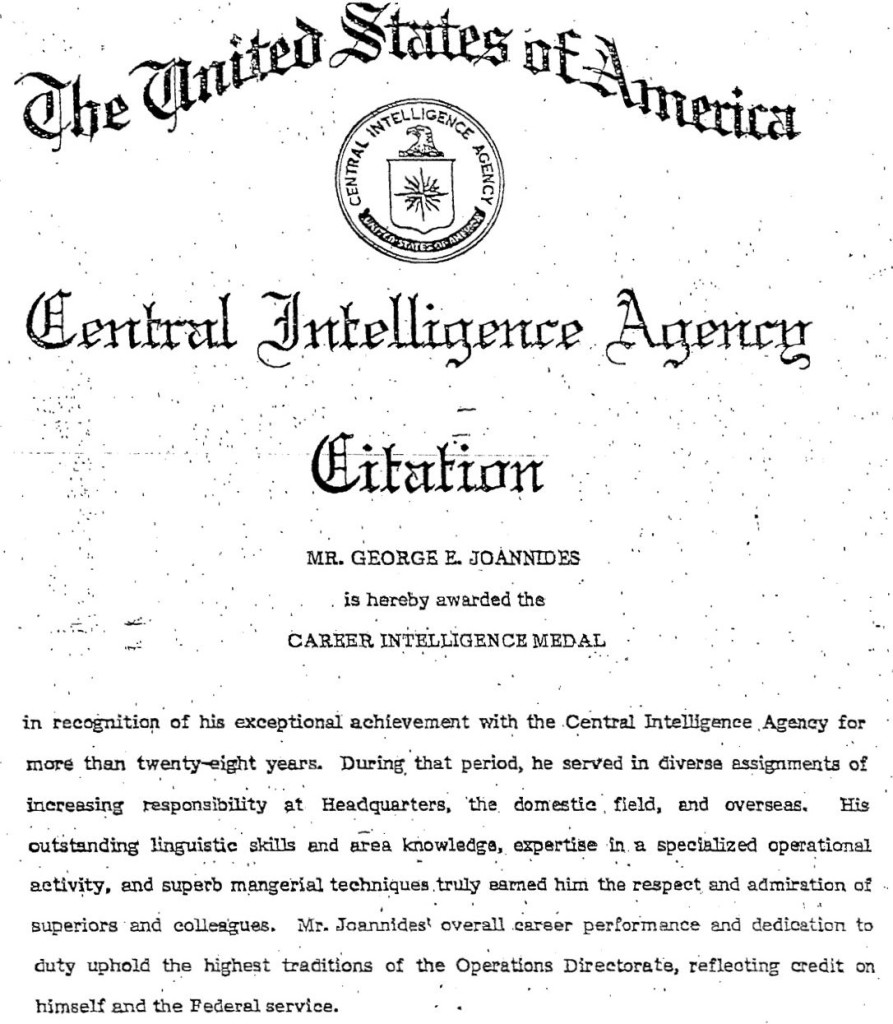 The language of the citation seems innocuous if you don’t know the details of Joannides’ undercover work.

A declassified version of Joannides’ ‘Fitness Evaluation’ of July 31, 1963 shows he was praised for his handling of the Cuban Student Directorate. Within weeks of the evaluation, members of the group publicized the pro-Castro activities of Lee Harvey Oswald. After JFK was killed, Joannides’ Cuban agents published the first JFK conspiracy theory, claiming Oswald and Castro were the “presumed assassins.”

Fifteen years later, Joannides’ “diverse assignments of increasing responsibility” culminated in his assignment  in 1978 as CIA liaison to the HSCA. In this position, Joannides concealed from Blakey and the HSCA what he knew about the events of 1963.

In short,  Joannides was honored for concealing material facts from JFK investigators. This fact does not benefit the CIA but it does benefit the American public. It tells us the JFK assassination cover-up was officially sanctioned by the CIA.