Category: From the Files

Home » Assassination » From the Files » Page 3

Yuri Nosenko was an officer in the Soviet KGB who defected to the United States in April 1964, shortly after the assassination of JFK. Nosenko said that he had seen the files that the KGB compiled on accused assassin Lee Harvey Oswald in his two and a half year residence in the Soviet Union between 1959 and 1962. The Soviet intelligence service had not recruited or used him as an agent, Nosenko said.

Deputy CIA Director Richard Helms told Chief Justice Earl Warren that he could not vouch for the accuracy of Nosenko’s claims exculpating the KGB. This left open the possibility that Nosenko was a false defector sent by the Soviet Union to obscure its role in JFK’s assassination. 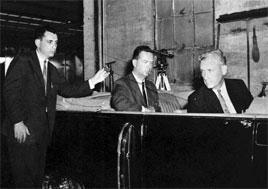 Fonzi would later write in his memoir The Last Investigation: “After those interviews with Arlen Specter, my belief in that Government would never be the same.”
…

In June 1964, Bobby Kennedy was grieving, guilt ridden and getting ready to leave his job as attorney general when he received a faintly ominous memo from the CIA. Written by Deputy Director Richard Helms, a man he did not trust, the four-page missive concerned a subject he did not care to think about: assassination.

Seven months before, the 39-year-old RFK had lost his brother and his political power in a burst of gunfire in Dallas. Under President Lyndon Johnson, Helms, a canny 51-year-old spymaster, had kept his job despite the fact that the CIA had been following accused assassin Lee Oswald for four years.

Helms’s memo, entitled “Plans of Cuban Exiles to Assassinate Selected Cuban Government Leaders,” reminded RFK that he had dabbled in the killing business before his brother’s murder and could not escape it even as he prepared to leave the government.

What Bill O’Reilly learned while writing his JFK bestseller

Long before writing his popular best-seller, Killing Kennedy, Fox News host Bill O’Reilly did real reporting on the events that lead to the assassination of President John F. Kennedy.

Here is O’Reilly on Inside Edition in 1991 doing a tough and accurate piece on retired CIA Western Hemisphere division chief David Atlee Phillips and the evidence that he associated with accused assassin Lee Harvey Oswald in September 1963. …

What Bill O’Reilly learned while writing his JFK bestsellerRead More »

On this day in 1963, the Warren Commission had its first meeting behind closed doors in Washington. As the seven commissioners began to discuss how to proceed, they grappled with the question of whether they should endorse the FBI’s upcoming report on JFK’s murder, or conduct their own investigation. After some discussion, they chose the latter.

The public was demanding explanation of the incredible and baffling events of Nov. 22-24. The FBI’s findings were already being leaked to the press; Asst. Attorney General Katzenbach said the FBI had denied leaking but “I can’t think of anybody else it could have come from.”
…

From the Files: The Church Committee Report

Want to read the original 1975 U.S. Senate report that blew the lid on CIA plots to assassinate Fidel Castro and other foreign leaders?

From the Files: The Church Committee ReportRead More »