The CIA has credible information implicating seven Cuban government officials in the assassination of President John F. Kennedy in 1963 that it has never made public, according to Brian Latell, a retired agency analyst.

“The Kennedy assassination should be added to the agenda for official Cuban-American negotiations,” Latell recently told JFK Facts. A retired CIA employee who served as the agency’s National Intelligence Officer for Cuba from 1990 to 1994, Latell  first made the allegations in his 2013 book, Castro’s Secrets. He elaborated on his views in an email interview.

Latell’s allegations come at a turning point in U.S.-Cuba relations.

After fifty four years of hostility between the two countries, the Obama administration and the government of Cuban president Raul Castro agreed last December  to normalize diplomatic relations. Representatives of the two governments are reported to be close finalizing the terms but have yet to reach an agreement.

Latell’s charges beg the question of why  the CIA, of all American institutions, would shield the Cuban government from adverse information. By one credible Cuban account, the CIA countenanced 634 different plots to kill Cuban president Fidel Castro, the now retired brother of Raul Castro.

Latell says he has no direct knowledge of why the CIA  suppressed the allegedly incriminating information.

“Perhaps it was thought to be so incendiary—and suspect—that it was quietly cocooned, not put on paper, recorded, or repeated to anyone outside a small circle at CIA headquarters,” Latell wrote in his book, Castro’s Secrets. “Under the circumstances, temporizing may have seemed the best option, the most prudent way to deal with a matter of such historic significance. After all, if it leaked that an otherwise unimpeachable, high-level Cuban intelligence defector had arrived with new information about the Kennedy assassination, a public outcry might have been unavoidable.”

Latell says that in the fall of 1963, Cuban government officials in Mexico City encouraged a young ex-Marine named Lee Harvey Oswald to assassinate the American president.

“The urge to kill Kennedy probably originated during Oswald’s meetings with Cuban spies and provocateurs at their consulate in Mexico City in late September, 1963,” Latell wrote in an email interview.

That charge has never been confirmed. After Oswald was arrested for killing JFK, he denied he shot the president saying “I’m a patsy.” The next day he was killed, while in police custody, by Jack Ruby, a Dallas nightclub owner.

What is not dispute is that Oswald visited Mexico City in late September 1963 in an unsuccessful effort to obtain a visa to travel to Cuba and the Soviet Union. Declassified records show that CIA surveillance teams observed him and reported to Washington. On October 10, 1963, six senior CIA officers conferred to write a cable about Oswald.

To support his claim that Castro supporters in Mexico City encouraged Oswald, Latell cited an account of a former Cuban intelligence officer named Florentino Aspillaga. who defected to the United States in the 1980s. According to Latell, Aspillaga told him that he received unusual orders from his superiors on the morning of November 22, 1963  to monitor U.S. radio transmissions from Texas, the day JFK was shot dead in front of a friendly crowd in Dallas.

Latell acknowledges the story cannot be independently corroborated. Aspillaga was debriefed by the CIA, according to Latell. .He says that one former colleague told him Aspillaga had given his account of his experience on November 22, 1963  to the agency. Two other Icolleague had no recollection of Aspillaga telling such a story, Latell saidl

“I am no longer in touch with him, and doubt I will be able to renew contact,” Latell said.

The CIA has never released any information about Florentino Aspillaga.

The ‘Castro did it’ theory

The “Castro did it ” theory of JFK’s assassination has  a long pedigree.

Unbeknownst to the American public, the group was guided and monitored by the CIA. Declassified CIA records show that the Directorate’s leaders met often in 1963 with George Joannides, the chief of psychological warfare operations branch of the CIA station in Miami. At the time, the CIA was giving the group $51,000 a month, according to a memo found in the JFK Library.

Former U.S. cabinet secretary Joseph Califano, who was deeply involved in JFK’s  Cuba policy in 1963 as Secretary of the Army, wrote in his 2005 memoir that he believed Castro was behind Kennedy’s murder.

Investigative reporter Gus Russo reached much the same conclusion in his books, Live by the Sword and Brothers in Arms.

More recently, former Warren Commission attorney David Slawson was quoted in Politico as saying that the Commission had been the victim of a “massive coverup” by the CIA. Slawson told reporter Philip Shenon, author of  the JFK book, A Cruel And Shocking Act, that he had changed his mind about Oswald’s sole guilt and now believed that the accused assassin had Cuban “accessories.”

The Cuban government rejects the charge. Fidel Castro and his security services have long expressed the belief that Kennedy’s assassination was orchestrated by enemies within his own government opposed to his willingness to co-exist with Castro’s communist government.

In a 2010 interview, Jeffrey Goldberg of the Atlantic, asked Castro about his view of Oliver Stone’s hit movie JFK which depicted the assassination as the work of men in the CIA and Pentagon.

“There were people in the American government who thought Kennedy was a traitor because he didn’t invade Cuba when he had the chance, when they were asking him,” Castro said. “He was never forgiven for that.”

“So that’s what you think might have happened?” Goldberg asked.

“No doubt about it,” Castro answered. 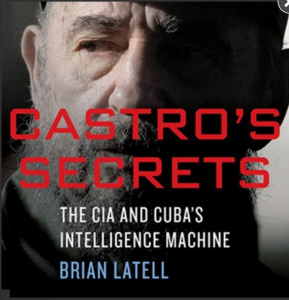 Latell also said that Manuel Pineiro, the head of the Cuban intelligence service in 1963, “would have been in the loop about Oswald’s visit and how he was handled by his officers in Mexico.”

Mirabal and Calderon are still alive, according to Latell.

The fact that Aspillaga’s story cannot be corroborated and that the anonymous sources cited by Gus Russo cannot be interviewed makes it impossible to confirm Latell’s claims.

In light of the U.S. government’s and the CIA’s unremitting hostility toward the Castro government for the past half century, I find it difficult to believe thhat agency officials would not give President Obama credible information that reflected negatively on the government in Havana.

The Obama administration has announced that it plans to remove Cuba from its list of governments that sponsor terrorism. There is no indication that the CIA or the Congress will object to this action. To me that is the most powerful indication that the U.S. government has no credible evidence that Cuban government officials were involved, directly or indirectly,  in JFK’s assassination.

Read it:  The complete  interview with Brian Latell.