What Ben Bradlee taught me about Washington journalism

I was hired as a junior editor at the Washington Post in September 1992, one year after Ben Bradlee retired. The man still prowled the newsroom, and, as one one attendee (I won’t say mourner) at his R-rated funeral service in Washington yesterday said, “As an actor, he was straight out of Central Casting. He was obvious. But he had cast himself in a pretty good role.”

Over the years, I edited some pieces by his wife, Sally Quinn, and I got to know Ben in passing. In a perceptive review of Bradlee’s memoirs for The New Republic, Michael Lewis parsed the substance and schtick that made the man. He was a jaunty editor whose courage in publishing the Pentagon Papers and pursuing the Watergate story did not mean that he harbored any deep desire to challenge or change the power centers of the capital. He embodied the journalist as Washington insider, even he relished his public image as the ultimate crusading outsider editor.

I didn’t begrudge the man his contradictions. He was a big in every sense and impossible to dislike. He played the insider game, and he often played it to the advantage of his reporters and the Washington Post Company. Sometimes he played it at the expense of his readers. Dangerously honest, he was not, at least not often, in print. As Michael Lewis asked, “How dangerously honest can you be and still remain cozy with the in-crowd?”

The influence of insiderism was evident in the culture of the newsroom I joined. The newspaper, under Bradlee’s leadership, had just gone on an extraordinary bender against Academy Award winning director Oliver Stone for making the movie “JFK.” Stone’s all-too-believable depiction of the assassination of President Kennedy as the work of his enemies in the Pentagon and CIA offended almost everyone in the Post newsroom. I must have heard it a hundred times in my first year at the Post: Stone was “awful.” He was “irresponsible.” He was (disgusted sigh), a “conspiracy theorist.”

When I first heard Bradlee  dismiss of Stone as a “kook” in a newsroom gossip session, it would have been easy to echo him. Bradlee, after all, had been a close friend of John Kennedy. He prided himself on no-bullshit explanations, and he had authority. But like most reporters. I wanted to ask a question. At a Post cocktail party I screwed up my courage and asked Bradlee about the events of November 22, 1963: What did he make of the eyewitness testimony that President Kennedy was struck by gunfire from two different directions?

This was in the mid-1990s, more than 30 years after the crime. I did not know the facts of the case very well, and I wanted to get his take on the evidence.

I was surprised to see this lion of a man shrivel in discomfort, even display a moment of vulnerability. Then he looked mighty pissed off.

“Not always,” I agreed. “But isn’t it weird that the Warren Commission never interviewed some of them.”

He looked at me quizzically.

“They couldn’t interview every kook on the street,” he growled, waving at the air.

That word again: “Kook.” That seemed like a prejudicial way to talk about the ordinary people in Dallas who said what they saw and heard that terrible day in Dealey Plaza.

(When I later interviewed some of these witnesses, none of them was a “kook.” There were some people whose accounts had changed over the years. Some were more credible than others. Most were reticent, not kooky, on the conspiracy question. I found the most credible Dealey Plaza witnesses, Bill and Gayle Newman, a retired plumber and his wife, are trustworthy, salt of the earth people whom you would like to have as your neighbors. For Bradlee to label them “kooks” was careless at best and a telling symptom of how insiderism could affect his news judgment.)

My questions tested the outer limits of Bradlee’s legendarily short attention span, and I changed the subject.

I came away from the party with an unsettling realization: Ben Bradlee really didn’t know how his friend Jack Kennedy came to be shot dead in broad daylight better than any better than anyone else. He wasn’t even comfortable talking about the contested facts of how his pal was murdered.

Yet he scoffed at JFK “conspiracy theorists,” and most of the newsroom scoffed with him.

Bradlee, of course, was the Post but his attitude seemed oddly un-Washington Post to me. Sure there were stupid conspiracy theories out there, and they deserved to be ignored. But what about the usual process by which editors and reporters unlock a big story? We theorized all the time at the Post about news stories in the constant effort to understand the story and report it credibly. Why did this happen? Why did she say that? Where was the money going? 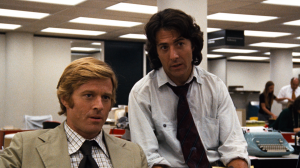 “Woodward and Bernstein were conspiracy theorists, for god’s sake,” said Jeffrey Frank, a colleague who went on to become an editor at the New Yorker, and who was exasperated by the newsroom sniping at Oliver Stone.

That sounded right to me. In their coverage of a third-rate burglary at the headquarters of the Democratic National Committee in June 1972, Bob Woodward and Carl Bernstein intuited a covert effort to violate the law, in a word: a conspiracy. While the pundits and the president’s men pooh-poohed the idea, Woodstein followed their theory that senior White House officials were conspiring against the public interest — and the facts they uncovered proved their theory was right.

That’s why they were heroes to me, and demi-gods of the profession. They were (at least in their prime) not insider journalists but outsiders. And Ben Bradlee, the insider, had the good sense to protect them. (In reality, it wasn’t quite as simple as depicted in “All the President’s Men.” Bradlee’s unsung deputies, Howard Simon and Larry Stern, deserved more credit than the legend gives them.) In any case, the tension between the paper’s insiderish and outsiderish impulses was central to the Watergate triumph.

Yet one thing that was not going to happen in the newsroom that Ben Bradlee built was the application of standard investigative reporting techniques to the JFK assassination story, despite the fact that the events of November 1963 are of enduring interest to a mass audience.

Aside from some good straight news reportage by George Lardner (such as “Archive Photos Not of JFK’s Brain Concludes Aide to Review Board” and “Study Backs Theory of ‘Grassy Knoll’), the tenor of the Post’s coverage during the reign of Bradlee and his heirs reliably reflected the consensus of journalistic insiders like Bradlee (and Chris Matthews and Dan Rather and Anthony Lewis and George Will).

Many insider journalists embraced the official theory of lone gunman (while other insiders, like LBJ, RFK, and Jackie Kennedy did not). Above all the insiders disdained the outsiders (like Oliver Stone or New Orleans District Attorney Jim Garrison) who had the temerity to question the rickety story of a lone gunman as constructed by the FBI, airbrushed by the CIA, and solidified by the Warren Commission.

The Post’s unseemly assault on Stone was not Bradlee’s finest hour. Indeed, with all due affection, I would say it was one of the paper’s worst performances, though I never said that to his face.

Bradlee didn’t hire me, and I wasn’t one of his toughest critics. When he razzed me about being a conspiracy theorist, I thought of him as just another hearty hack who had dropped the habit of fact-checking in retirement. (I had never published or defended a JFK conspiracy theory.) I didn’t mind. I aspired to be a hearty hack, just like him. I told him I was headed to Roswell to do an Area 51 story, and he laughed.

I figured I would wait until the time was right to tell him what I really thought.