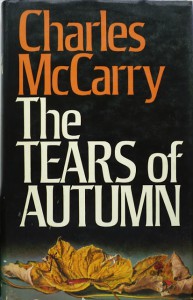 “I’ve returned to Charles McCarry’s ‘The Tears of Autumn,’ a 1974 novel reissued in 2005 as a classic, by a former CIA agent, then editor, now novelist, and, in my judgment, if not the the best, one of Washington’s best authors. I read this book on the subject of the assassination years ago and was blown away by the rich literary quality of McCarry’s writing and intrigued by the persuasiveness of his unique speculation.”

It has been a while since I read the book but I recall being impressed by its taut realism about the milieu of the CIA in the early 1960s. I was skeptical about McCarry’s theory that the assassination emanated from JFK’s Vietnam policies, but the fact that McCarry was a career CIA officer and a political conservative made its conspiratorial take on JFK’s death all the more interesting.