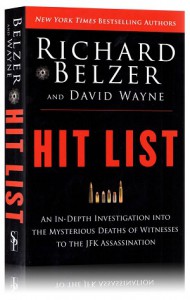 [Editor’s note; Note the byline on this story. It is not written by Jefferson Morley. JFK Facts welcomes contributions from readers, which are published every Saturday. Articles should be 750 words or shorter and should deal with recent developments or publications about JFK’s assassination, presidency or related issues of secrecy and national security.. If you want to contribute, email me your submission here.]

Imagine you are a high school student and you are writing a paper on some contentious historical issue — say, whether Barack Obama was born in Kenya, or whether Dick Cheney mounted the 9/11 attacks. And imagine you simply surf the web for information and believe pretty much anything you find on a web page. One can imagine the results.

Now suppose you are a grown up celebrity, and are writing an entire book, but your research methods are the same. You get a book like Richard Belzer’s Hit List, which claims to expose the “mysterious deaths” of people who were “witnesses to the JFK assassination.”

Of course Balzer uses books for sources too, but many are fringe books. While some writers and witnesses are believed by conspiracists and disbelieved by lone assassin theorists, what is peculiar about Belzer is that he uses so many sources that are considered unreliable (if not downright wild) by the vast majority of active conspiracy researchers.

As one might expect, given that list of witnesses and sources (and some with wider support among conspiracists, such as Jim Garrison and Richard Case Nagell), the book is a mish-mash of factoids.

But worse than the factoids is the intellectual slovenliness of the entire enterprise – something that Belzer inherited from his predecessors Penn Jones (father of the “mysterious deaths” list) and Jim Marrs (who extended the list to 103 people in his 1989 book).

The “mysterious deaths” are supposed to be from among “witnesses” in the case, but in the vast majority of cases it’s not at all clear that they “witnessed” anything important, and in none of them is it clear that the “witness” had any knowledge dangerous to any conspiracy. For example, Deslesseps Morrison, the mayor of New Orleans, is the subject of a short chapter. How is he connected? Well, Belzer explains, New Orleans was “the center-staging location for the assassination.”

The real criterion for being in the book seems to be that some conspiracy author, somewhere, considered you suspicious. Therefore, an absurdly large and diverse cast of characters gets a place. It includes mobsters, FBI people, CIA people, journalists, anti-Castro Cubans, Jack Ruby’s strippers, an orthopedic surgeon, the daughter of a fellow who knew Jack Ruby in Chicago decades before the assassination, and country singer Jim Reeves.

We don’t know how Patsy Cline failed to make the list. Has anybody investigated the Grand Ole Opry?

The result is an extremely large number of supposed victims. If all of these people, or even a substantial minority, knew things dangerous to conspirators, the conspiracy must have been very large indeed, or else it leaked like a sieve, with a small army of assassins being needed to knock off everybody who might “blow the whistle.”

Then, of course, another small army of assassins would be needed to eliminate the first members of the “clean up squad.”

Once we concede that this is implausible, we have to question the entire list. If we know that most of the people on the list must have died for reasons unrelated to any conspiracy, we begin to understand that no solid, objective criteria went into making it. Rather, it’s pretty much free association in the minds of conspiracy-minded researchers.

Forget the book’s ability to wow innocent neophytes. When it falls into the hands of people reasonably critical-minded (a mainstream media producer, journalist, textbook writer, or such) it tends to discredit conspiracy-oriented research.

107 thoughts on “Belzer misses the mark with ‘Hit List’”