“I have read the Warren Commission Report in its entirety and dozens of other books as well, I am sorry to say the only thing I am absolutely sure of today is that at least two of the shots fired that day in Dealey Plaza came from behind where I stood on the knoll, not from the book depository.”

–Cheryl McKinnon,a journalism major who witnessed the assassination of President Kennedy. McKinnon went on to become a newspaper reporter for the San Diego Star News. 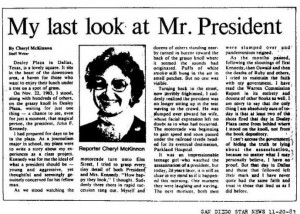 Here’s her account of what she saw and heard, published in the Star News on November 20, 1981.