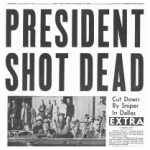 AllGov, the government watchdog site, reports that Dallas Mayor Mike Rawlings says he will meet with John Judge of the Committee on Political Assassination (COPA) about the Dallas’ controversial planned commemoration of JFK’s assassination.

The dilemma in Dallas is, Can the city commemorate the 50th anniversary of JFK’s death without mentioning the enduring questions about the causes of his death. I doubt it.

“Many Americans (76% in a 2009 CBS survey) believe more than one person was responsible for Kennedy’s death, which the government attributed solely to Lee Harvey Oswald.”