Max Holland comments on my post about Dale Myers and Todd Vaughan’s criticism of his 6th Floor Museum presentation on the gunfire in Dallas..

“The dispute concerns the timing of the gunfire in Dealey Plaza. Holland argues the first gunshot was fired from the 6th floor of the Texas Schoolbook Depository Building by Lee Oswald before Abraham Zapruder started filming the presidential motorcade. Holland suggests that the shot was deflected by a lamppost and hit a sidewalk curb, sending a chunk of concrete into the face of bystander James Tague, wounding him slightly.”

Via email Holland added these thoughts:

1) it would perhaps be more correct to say “restarted” rather than started. However, that’s not too important.

3) The bullet then hit FIRST the concrete skirt on south Elm Street BEFORE being deflected further down to curb on south Main Street.

4) We do not claim that a chunk of concrete hit Tague; just that there is a connection between the bullet that struck the south Main curb and Tague’s injury.

“This is a still taken during the 2011 filming of NatGeo documentary. 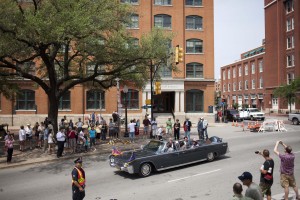 When I showed it to Allman he identified lamppost circled in red as the lamppost he referred to during his 2013 Dealey Plaza interview. You can also note how close the lamppost was to the black and white sign referred to by Amos Euins. (We had to construct a mock-up because B&W sign had long since been removed; but the evidence of where it was in the ground was still there and that’s where we placed the mock-up).